I can't decide if this is a fine sight or a worrying one... 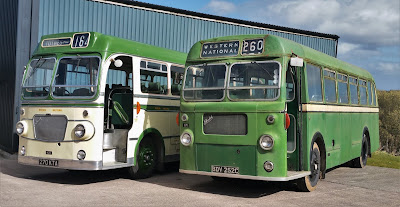 Not only was this the first coming together of the two brothers since 671 arrived, this was almost certainly their first meeting in over 40 years. They're likely to have encountered one another in the early 1970s, when both worked on Somerset routes around Taunton; one day, perhaps, we'll find a photo to confirm it.

For now, I'm quite happy with these ones, opportunistically taken in the yard during an essential move around. (Actually, it was deliberately arranged for pure indulgence - nice try, Sheppard.) 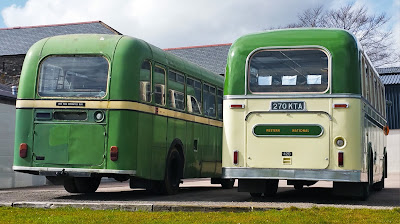 Followers of 270KTA.co.uk will know that preparations for the 2016 Penzance Running Day have taken priority in recent weeks. Nonetheless, I've completed a few little jobs on 671 to enable major work to begin in earnest soon. I've fitted a new set of batteries so that I can test the work I'll be doing on the engine (yes - it not only runs, but starts on the button!). 671 arrived with 'leisure' batteries fitted, designed to power utilities in a caravan and not really suitable for firing up Albion EN250 engines...

I've also investigated the excessive exhaust smoke issue (see the video for details!), and suspect that a combination of timing, poor adjustment of the cold-start facility and a worn diaphragm in the injection pump governor is to blame. Having sourced the necessary parts, these will be my first tasks to tackle over the next few weeks.
The keen-eyed will notice the awful make-shift rear number plate has been removed, enabling a template for new glass to be cut.  And, for the little it matters at the moment, it's had a good wash... 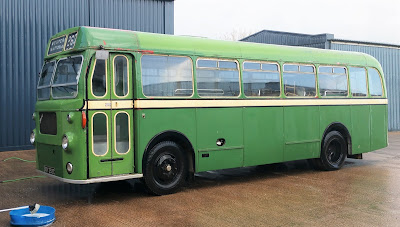 With a successful Penzance Running Day now in the bag for 420, it's time to get stuck-in. Seeing the mischievous smiles at the top of this post gives much encouragement and reminds me that, after quite a few 'little jobs', even really naughty SUs can eventually be tamed. My early impressions are that 671 may be a little more co-operative than (br)others have been along the way... but that's probably a dangerous thing to say.

After all, it's now two against one.
Posted by David Sheppard at 08:01