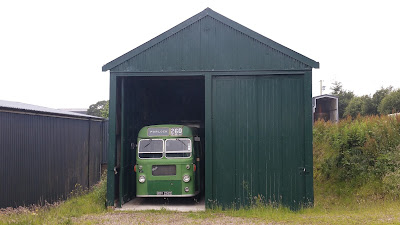 During my little 'facts of life' lecture on the difference between SU buses and SU coaches, there's one major difference I forgot to mention.


"... the floor on an SU bus sits directly onto the top of the chassis; you've lost the luxury of having a couple of inches above it that you get on an SU coach, and you'll find that it matters when you come to try to remove the injector pump (or, to be more precise, the pipes to the governor at the end, which you'll find are ... extremely fiddly and difficult to get to!)."


Very wise words from a man who's been there, face down on the floor of his own SU bus, West Yorkshire SMA 5. 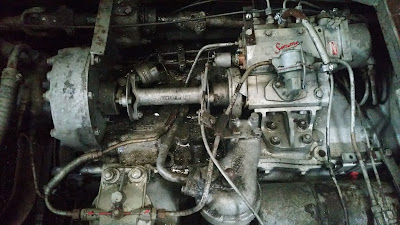 I suspect Trevor's hands are as cut and bruised as mine have become during the struggle to replace the rubber diaphragm in 671's pneumatic governor. This is the part on the back of the injector pump (top right) which regulates fuel to control the speed of the engine. 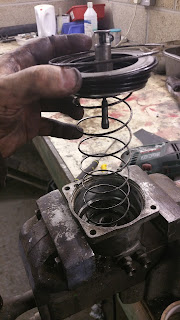 On an Albion EN250 engine, this happens by varying the vacuum on one side of a rubber diaphragm, linked to the rack in the pump. This sliding assembly is spring-loaded so that its default position allows maximum fuel. When the engine is running, a vacuum is created which fights against the spring to pull the governer to tick-over speed; as the throttle is increased a butterfly valve in the manifold is opened which allows air into the system (reducing the vacuum). Thus, the assembly moves in favour of the spring and the fuel is increased - so the engine speeds up. When the diaphragm is worn or rotten, as 671's was, the vacuum is compromised and the engine tends to tick-over too fast and becomes harder to control.

The job itself isn't too much of a challenge, if very fiddly for two hands, but getting to the governor is a different matter. The bolts are just about accessible on an SU coach (I've done three of those!) but, as Trevor warned, the lower floor of the SU bus means that only angels and small children are able to find their way in. Being neither, I eventually managed to access the bolts from under the bus by blindly poking around with a socket on the end of FOUR extension bars, fed across the top of the gearbox from two bays back! 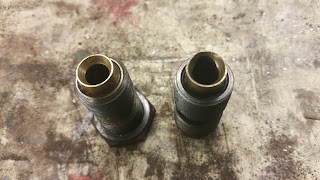 As it happens the job was worth doing. 671's diaphragm wasn't too bad, but the special adjuster screw on the back of the governor (which allows angels and small children to fine tune the movement of the assembly inside) had been worn to an oval shape by years of hunting. Luckily, the Blue Peter of SUs, I just happened to have another one ready to go.

Refitted, there's much improvement - but guess what? That adjuster screw now needs turning and there's absolutely no way....

Unless... know any kids? 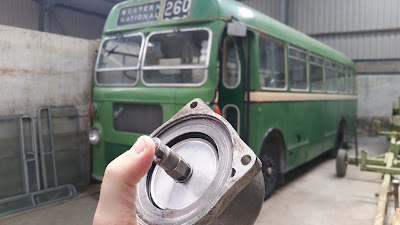