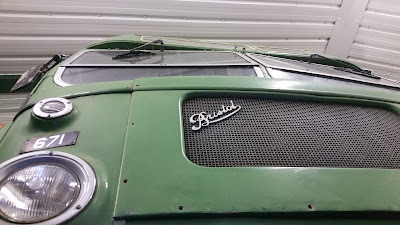 In fact, I've been 'at it' in earnest for nearly six months and there's now much to report. During a few rare moments with clean hands, I'll do my best to bring you up to date via a series of posts that show you the various work-fronts in action and explain what's been making me so filthy.

The project has continued apace since January, when 671 was moved from storage into an area where it can be immobilised and worked on in relative comfort for the first stages of its restoration.

Last year's preparatory work on the electrics and pneumatic governor meant that it would now start on the button and tick over without either stalling or gradually revving itself into oblivion - both little interim triumphs.

During the move, it was rid (at last) of everything that didn't belong to it, not least the dozens of unwanted bus seats which previous owners had heaped inside it. The interior, whilst depressingly worn after years of neglect, is all there and has dried out nicely after its first few months 'in prison' (for this is how it must feel to 671 after a lifetime out in the open). 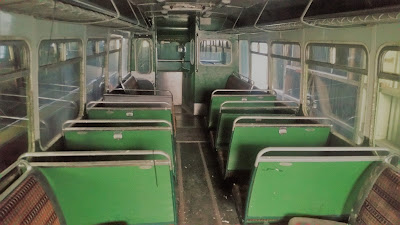 Since January I've been gaining momentum with at least a day a week, often two or sometimes even three, dedicated to on-site restoration. Much else for the cause happens in between those days - the sourcing of parts and other spendings of money - but it's those days which move things along.

And moving along things are. Join us soon to find out how... and what this is....