"Where do you even start?"

Human beings are wired to ask this question whenever they see somebody else's unenviable task before them. Usually it's rhetorical, an attempt at driving home what an idiot they think you are for taking on such an impenetrable project.

But occasionally they genuinely do want to know the answer.

When it comes to restoring a bus there are different philosophies on the answer. Much as I look forward to making a visual difference to 671 (which in its current state prompts the rhetorical form of the question quite a lot), this idiot believes it's best to begin with the vital organs: all the various components and control systems associated with the chassis, the engine, gearbox, hydraulics, brakes, steering etc.

Work since January has mostly been allied to the engine which was suffering with a severe white smoke issue. There are several potential causes, and consequently several work fronts to be started, all of which 'need doing anyway' whether or not they solve this particular problem.

First of all, the fuel injector pump. Having replaced the diaphragm in the pneumatic governor last year, it became clear that, really, the whole pump needed an overhaul. Of particular concern was that the cold-start mechanism was locked open, allowing excess fuel at all times and therefore one potential cause of the smoke (1). 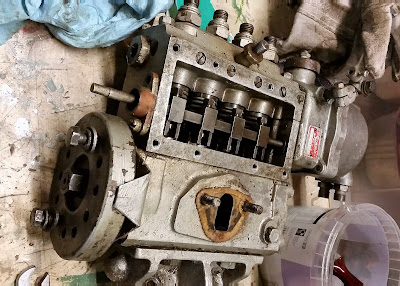 Briefly, the cold-start is a device that helps the engine to start from cold by providing extra fuel. When the knob is turned, it allows the rack inside the pump (which governs the amount of fuel being delivered to the engine) to spring forward to a position where it's enabling maximum fuel to aid starting. When the engine fires, the vacuum created pulls the rack backwards, the spring inside the knob returns it to its original place, closing off the excess fuel position during normal running. 671's cold start mechanism was mangled and a tiny (but crucial) spring broken.

With expert help from Sheppard Senior and parts from my two donor pumps (useful having a pump that's common to the Fordson Major tractor, no?...), a strip-down and rebuild has resulted in a fully functioning cold start mechanism, and injector pump.

With pump absent, I've taken the opportunity to fully degrease, prime and paint the top of the block and some of the surrounding chassis.

Incidentally, this operation was interrupted with an operation of a different kind on 671's owner, meaning that the first and second coats of silver were applied while trying not to burst nineteen stitches in the upper-abdomen - but that's another story!

Six goes with Jizer, followed by four coats of paint, have resulted in a much brighter and well protected environment.

Learning from my endeavours with 420, my preventative pipe replacement programme has been extended to 671. I've made replacements for all the main fuel pipes, which were quite worn and mostly fitted with potentially troublesome press-fit olives. They all now have neatly braised 'proper job' ends, like these two seen under construction.

I've also had a new set of injector pipes made. Once bitten...

All this is now ready to be refitted, at which point we can address potential smoke cause number (2), the timing. 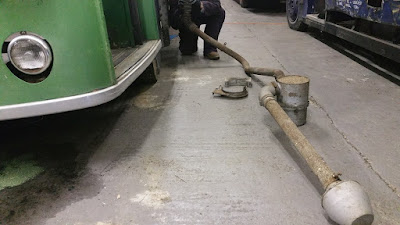 Meanwhile, in a world of many simultaneous workfronts, I've already been grappling with potential smoke cause number (3)... come back soon to find out about that.

Remember, this was just the start...
Posted by David Sheppard at 18:59