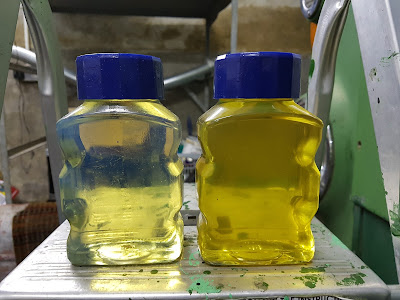 Is there a Doctor in the house?

These two samples, though not quite the gruesome specimens they first appear to be, may be helpful in nursing 671 back to good health.

It appears that fuel contamination is yet another factor in 671's heavy smoking. Taken from the filter bowls of the two brothers when (recklessly) I decided to change their secondary filters simultaneously, the sample of nice fuel on the left comes from 420 and the dark, murky fuel on the right, from 671. 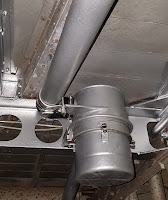 In any case, I plan to drain and flush the fuel tank before the refurbished pump is refitted, and we can then test all the engine related work so far - which, by the way, we're now pretty much ready to do.

The mended 'python' is now back in place (further painting to be done in the vicinity) and the network of new fuel pipes - as comprehensive and impressive as the tube map - are all ready to go.

Meanwhile, while we wait for the pump to be delivered (by SUL coach, of course, during Kingsbridge Running Day), I'm about to begin work on 671's rear brakes - a task which fans of 270KTA.co.uk will be able to guide me through in their sleep, as it's now been 8 years since I last did it.

In readiness, 671 is now officially airborne, supported on axle stands and around a foot higher than nature (or Brislington) intended. 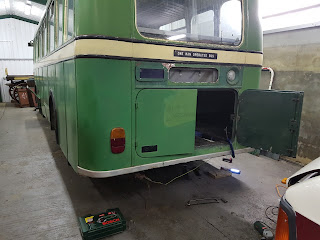 Unlike last time, I'm actually looking forward to finding out what state they're in...

And finally, burger fans will lament... 671 is no longer equipped with a towbar. This was fitted (appallingly) sometime around 2011 to enable the final indignity of towing a small trailer. I took great delight in removing this blight one Saturday afternoon, officially bringing to an end an era in which poor 671 had been treated as a circus mule. 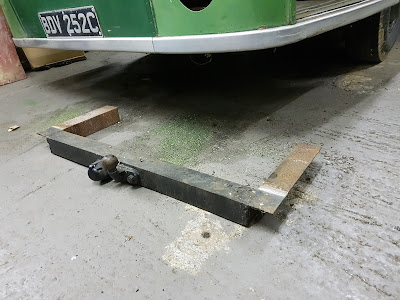 The cruellest of observers suggested that I should install it permanently at the front, but they obviously don't realise what a co-operative little bus 671 is turning out to be...
Posted by David Sheppard at 19:44